20 years ago at the 1996 Masters golf tournament Greg Norman lost a 6 stroke lead during the last round.

He did more than just lose that lead. He imploded in front of the golfing world, ultimately losing by 5 strokes.

Golfers lose tournaments all the time. Why was this one any different?

Because it was the moment that this almost mythical symbol of the modern alpha male athlete (considered one of the most talented and imposing golfers of his generation) let down his guard and became vulnerable to the world. 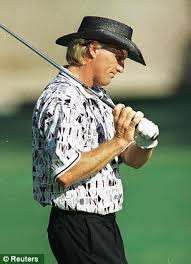 Greg Norman recalls his state of mind just prior to starting that fateful final round. Below he’s recalling in an interview what he should have done (open up, confess, be vulnerable) with his caddie and golf coach that day.

“I should have turned to them both and just purged,” he says. “It would have taken 10 minutes, and it would have been over with. But I didn’t do it. So the lesson there is, don’t harbor things internally. Don’t push the elephant under the rug. Anxiety and happiness both come from within. And so you have to ask, which one do you prefer?”

Losing – in embarrassing fashion –  a coveted golf tournament like The Masters in front of the golfing world had to be incredibly painful. Greg Norman could have easily sulked away from the golf course that day to lick his wounds, maybe cry a little, and wallow in his own self-pity for awhile.

He stood there in front of reporters and the world exposed to the raw emotions and bright lights of that moment. He was completely open and courageous in defeat.

By being those things he was also extremely vulnerable and it’s a moment that is still remembered 20 years later – and in a way can be said to have defined Greg Norman as a man and a golfer.

The Crossroads of Vulnerability

We can often times in life come upon a crossroad called vulnerability.

Take a wrong turn and vulnerability can lead down a dark, scary, and lonely street towards:

And a natural reaction to this is to “armor up” as Brene Brown calls it. We lock our doors and shut all the bad stuff out.

This is a natural reaction but it is a reaction based in fear. It is exhausting always carrying around that armor. And while that armor might keep out the bad stuff it almost always keeps out the good stuff as well.

But let’s say we come upon that same vulnerability crossroad again. This time we take a deep breathe, lean into the fear, and take another turn that leads us towards:

Same intersection yet two very different destinations. How? Why?

Being vulnerable makes us human and allows for all of us to relate to another’s struggle, challenge, screw-up, loss at the Masters.

Vulnerability is honest. It is standing there proverbially naked for the entire world to see.

It is being real and that can be frightening.  But deep down we all innately connect to vulnerability because it allows for a real connection.

Vulnerability and my IBD

There have been some days, months, maybe years when I would come upon the vulnerability crossroad and take that dark turn towards those scary emotions.

The above emotions and feelings were felt the most a few years after my diagnosis of ulcerative colitis in 2008. I look back at those times and realize I felt that way because I was scared. I was physically weak from my weight loss. I felt like I could not defend myself against and survive life’s challenges.

Shame that I was somehow complicit with deserving my chronic disease diagnosis.

If I had just been better

things would have worked out better for me.

There was a missing piece to a unseen puzzle that I expected myself to somehow have known about prior to my symptoms and diagnosis.

So what about now? How did life improve? How did I find a better direction at the last vulnerability crossroad?

The seed was planted when a voice inside my head quietly said, “this sick, scared, weak person is not who you are supposed to be”.

Yes, I had been diagnosed with a chronic disease called ulcerative colitis. But that was not my authentic identity. It may be a part of me but it was not what defined me as a person.

It was not my identity going forward.

I realized that I valued health, strength, and peace of mind and I decided I’d practice learning about, sharing, and embodying those ideals as best I could. IBD then became just another characteristic of me as a healthy person, like having brown hair was just a part of me. It decreased in power, significance, and control over my emotions and goals in life.

That quiet voice I heard was not an instant moment of miraculous healing. However, it was a powerful turning point towards a better place. It has been a daily focus for over 5 years now and something I practice refining and adjusting continually. Some days are better than others but each day I work on getting a little bit better for that day. And, ironically, the more open and honest, the more vulnerable I can be with myself the more improvement I find.

When I stay open and vulnerable I see growth in the positive aspects of living vulnerably with IBD.

So how did we start with Greg Norman’s Master collapse in 1996 and end up with all the emotions of vulnerability and their connection with my IBD?

I think it was due in part to the vulnerability I felt today to trust a friend’s video recommendation and watch Brené Brown’s Ted Talk. It was partly the result of the empathy I felt towards Brené Brown during her video and the belonging I felt wanting to help create and share knowledge like she did. It could also have been the joy and love I felt when I heard her say that we should “release the ideal of who I’m supposed to be” and move forward.

In another Ted talk she discusses shame and in it credits this quote from Theodore Roosevelt’s with changing her life:

“It is not the critic who counts; not the man who points out how the strong man stumbles, or where the doer of deeds could have done them better. The credit belongs to the man who is actually in the arena, whose face is marred by dust and sweat and blood; who strives valiantly; who errs, who comes short again and again, because there is no effort without error and shortcoming; but who does actually strive to do the deeds; who knows great enthusiasms, the great devotions; who spends himself in a worthy cause; who at the best knows in the end the triumph of high achievement, and who at the worst, if he fails, at least fails while daring greatly, so that his place shall never be with those cold and timid souls who neither know victory nor defeat.”

Maybe that quote was at one-time read by Greg Norman and gave him solace? It is far too easy to sit back and watch on tv what Greg Norman went through and make derisive comments about “I can’t believe he could do that” or “I’d never blow a lead like that” because the men and women saying those critiques were never in that Masters arena like Greg Norman was. His face was most definitely “marred by dust and sweat and blood” after that day 20 years ago yet, while he may have failed, he at least failed while daring greatly.

And maybe that is what living life vulnerably with IBD can be like? Day in and day out we wake up to living in the arena, striving valiantly; possibly erring so many times while coming up short but still spending ourselves in a worthy cause with the knowledge that if we fail we will fail while daring greatly.